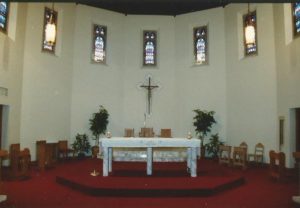 In 1921, Bishop Charles J. O’Reilly saw the need to add a new parish in the southwest
Lincoln area.  He sent a letter of recommendation to the parishoners of St. Mary Cathedral
Church explaining his reasoning for the addition which was met with much opposition.  Overcoming
many hurdles, largely financial, the first Blessed Sacrament Church was constructed in south Lincoln
at sixteenth street and Roselyn Terrace.  The building was built for a cost of $1500.  The first Holy Mass was celebrated
on the Feast of the Assumption of the Blessed Virgin Mary on August 15, 1922.

The original school building was built at a cost of $5000 and dedicated in August 1926.  It was a modern
brick building with a full basement that was used as a hall and school chapel.  Original plans dictated that
it would eventually be converted into a church.  There were two girls and four boys in the first graduating
class of 1927.

Due to several boundary changes and growth of Blessed Sacrament Parish over the coming years, Father
August Kraemer (Pastor from 1931-1969) identified the need for a larger church building.  Though finances were
again a large concern, as was World War II, the church building project was awarded to the Olson Construction
Company for $113,500.  On April 26, 1950, Bishop Louis B. Kucera dedicated the new church, across from the
school building.

Several other improvements were made to the grounds in the years to come, including a new rectory and an annex to the
southern corner of the building in 1971.  In 1982, an addition was made to the school building which included
several classrooms, a gymnasium, and cafeteria.